Experience the Grand Traverse Lighthouse in the Leelanau State Park 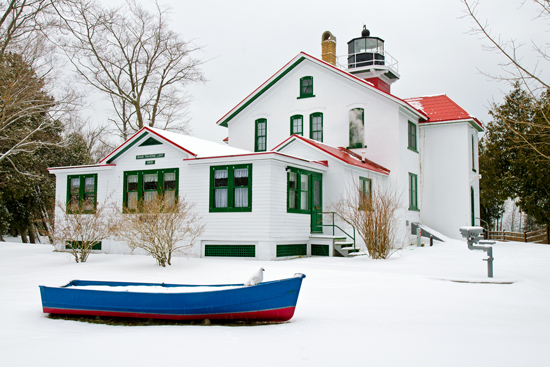 Photo by Todd and Brad Reed Photography
The Grand Traverse Lighthouse is situated at the end of the Leelanau Peninsula within the Leelanau State Park, about eight miles north of the town of Northport. It's one of the oldest lighthouses on the Great Lakes, and has guided ships in the Manitou Passage of Lake Michigan for close to 150 years. This lighthouse is sponsored by the Grand Traverse Lighthouse Foundation and you may tour the historic and educational museum, which depicts a lighthouse keeper's dwelling from the early 1900s. You will find a variety of exhibits depicting a broad spectrum of maritime and local history. Inside the lighthouse you can view various exhibits, including shipwrecks, foghorns, and other area lighthouses. Demonstrations on the foghorn take place throughout the year, and a small admission fee lets you climb the tower where you are treated to fantastic views of Lake Michigan.

The Fourth Order Fresnel Lens is on display in the keeper's quarters, and the light itself is listed in the National Register of Historic Places.

Grand Traverse Light Station -- Located on the tip of the Leelanau Peninsula in Northern Michigan, The Grand Traverse Light was established in 1852.
Point Betsie Light Station -- Nestled in a dune just south of Sleeping Bear Dunes National Lakeshore, the tower stands 39 feet tall, but with the height of the dune it towers 52 feet above Lake Michigan.

Manitowoc North Breakwater - Walk out to the end of the pier to this Manitowoc lighthouse, and wave to the carferry S.S. Badger as the ship passes by.
Algoma North Pierhead - This lighthouse can be seen all along the Crescent Beach Boardwalk and is accessible via the pier if you want to venture closer.
Kewaunee Pierhead Lighthouse - Located in Kewaunee, Wisconsin...halfway between Sturgeon Bay and Manitowoc along Lake Michigan.